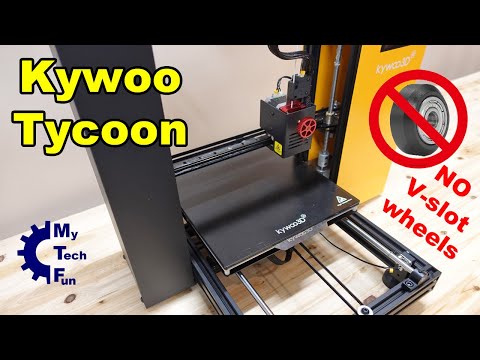 15 reviews
Kywoo3d
KY-TY-S00103
11 In stock
$489.00
Note: Due to the difference in the printer stock in different warehouses, the printer you received may have some minor differences from the latest version shown on the product detailing page. If you have any questions about the printer, please contact business@kywoo.com.

Subcribe to back in stock notification

Adding product to your cart

OK, I admit, this is my first 3D printer ever. I was a bit worried as this is not one of the usual suspects when talking about 3d printers. However It was very easy to assemble the two main parts and it was ready to print in no time. I followed the bed leveling procedure, but before that I watched a review on the YouTube how to make sure the bed is as leveled as possible even before starting the auto-leveling procedure. After that I printed the cube and it was close to perfect. Same with the Benchy (the ship). And for those I used the included filament. So it was a good start!
Well, I waited a few weeks before writing a review, so I am going to be as honest and objective as possible, and I will explain later why I am giving 4 starts and not 5, though the potential is there. I have to say that I used the original firmware only for a few days and then I flashed the latest one - 2.1.3, so here are a few things - first of all, one time the printer just reset itself immediately when I inserted the memory card - strange, but occurred only once. Then there is the thing with the WiFi. Using Cura 5.2.1 and the MKS WiFi plugin works, but one has to be persistent when trying to print remotely. That is because most of the time it fails. I have to retry 4-5 times (mostly) before the transfer actually starts, and sometimes it would start on the first or second attempt. Once it does though, everything is OK. So this is one of the reasons for a star less. Another annoying thing is that the printer waits for the bed to heat up and THEN it starts heating the nozzle. Why? So I usually wait for the bed to come say 10 to 15 degrees before the final temperature and start heating the nozzle manually. This way they reach their designated temperatures almost at the same time, which is better. Heating is a bit slow, but not an issue.
And now let's get to the biggest issue I encountered while using the printer. And this is the bed itself. Actually not the bed, but the support of the bed. Using those rods and the linear bearings is fine I guess, but beware - they bend if the bed gets pushed a bit harder downwards. How that happens? Well, during the cleaning process. Sometimes I need to push a bit harder with the cloth and then it happens. At firs I didn't notice it, but at some point my prints started to fail and I had to compensate with the Z-axis, but once perfect first layers not only started to warp, they began to not stick properly and completely fail the whole print. Well, after I discovered the issue, it was fixed and I got my good prints back. However I still need to tinker with the Z-axis offset occasionally. So my recommendation to the engineers is - replace the rods with rails - the Y-axis is too long for these rods - the diameter is fine when no force is applied to the bed, but a little push and buy-buy perfect levelling. So this is the main reason for the 4 stars. Now there are a few other things that could be improved also, like adding tensioners for the belts, but this is not an issue. Also, I feel like the touch on the screen is a bit inaccurate and I need to touch a bit lower to avoid selecting what is above my finger. The interface could be improved, but not a necessity.
And finally, if I was asked if I would recommend this printer, the answer would be YES, definitely! It is very easy to use, prints fast, accurate, and does the job every time if you avoid bending the rods. I would say, it has its charm and is a good start to make improvements over the distinctive and good design. Oh, and fix that WiFi glitch.

I've purchased this printer (Kywoo Tycoon) just weeks ago and I really can recommend it. I have various FDM printers (Flashforge, Cetus, and few other brands) and this one is by far the best I've ever had!
Print results are extremely smooth and using the recommendations from Aurora tech (Cura settings) provides smooth results, no stringing, no layer shifting etc..
Upon delivery my printer was missing some of the basic parts to assemble it, but contrary to what some are mentioning below, customer service is friendly and responds adequately resolving my issue by sending the missing parts in a very timely manner (less than 5 days shipping from China).

The most powerful design of Tycoon is the Nozzle kit we select, Unlike other normal 3d printers, the extrusion and heat dissipation structure on the 3d printer are seamlessly integrated to avoid vibration and terrible wear, especially the cool red rotate wheel design makes the filament easier to feed-in. With this, you can better view the situation of printing in real-time, make sure of the model can be perfectly print-out.

Leave the time sink of manual leveling behind, Save time and maximize accuracy and print quality with auto-leveling - the Kywoo makes adjustments automatically as you print. Adjustable foot mats add further stability to your printing.

The Wifi function allows files to the printer can be transferred via Cura from your desktop or laptop and print quickly, also, Tycoon 3d printer is Fully-compatible with both SD and TF cards - no card adapters required. (This function is not in the Beta version machines, but will be shown on the next batch machines.)

We are making a difference, Unlike other 3d printers, the structure of the tycoon 3d printer is specially designed with Double Z-axis, Double Y-axis, Synchronous belt, and Double Gantry structure for 100% stable ensured, No Wobble & Shake Anymore.

Most of the bacis DIY 3d printers on the market come with the normal mainboard, the "whining" and "whirring" noises come out while printing might drive you crazy frequently. The Tycoon 3d printer is specially customized with a 32-bit TMC2208 Silent Motherboard, higher speed processing, stronger expansion, Lower Decibel provides you a quiet working environment and higher print quality. No disturbing problem and failure models happened anymore while printing.